Whether you’re new to international shipping or a frequent shipper who wants to grow your business – we’ll help take your business everywhere it needs to go.

Shipping To and From the Rest of the World

For over 20 years Phantom Couriers has been connecting businesses to the world with our international courier services. Our network and affiliates offer world-class international delivery services to and from more than 220 countries and territories worldwide. Whether you need your shipment to arrive at its destination overnight, or if standard international shipping will do, we have the right solution for you.

• Phantom Couriers International 9AM
Guaranteed delivery to and from select international destinations by 9 a.m. the second business day.

• Phantom Couriers International 10:30AM
Guaranteed delivery to and from select international destinations by 10:30 a.m. the second business day.

• Phantom Couriers International
Guaranteed delivery to and from most international destinations by the second business day.

What benefit will a same-day B2C courier company bring to my company? 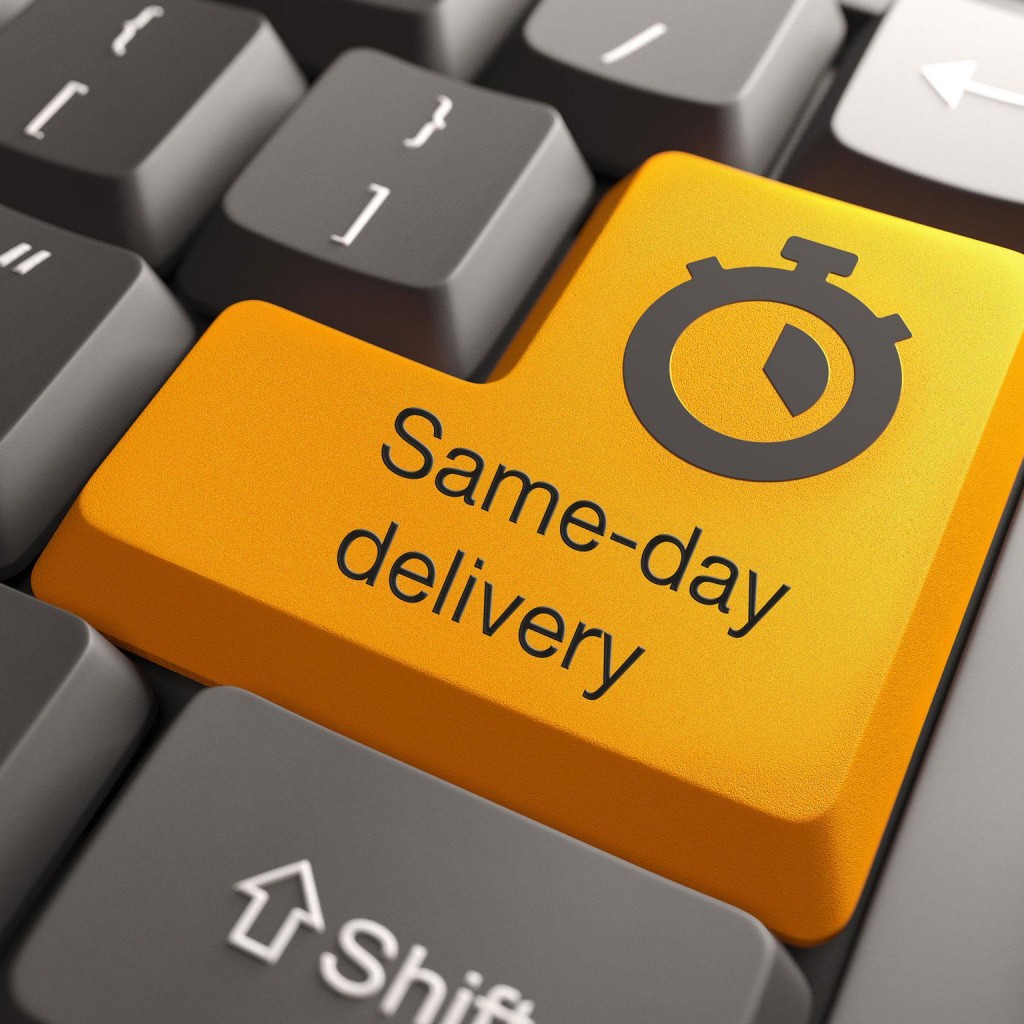 Same-Day Delivery has become one of the most buzzed words in the last year around the office and at customer conversations. Last mile deliveries operations from the likes of Walmart, Amazon, eBay or Google, have seen it as way to improve their customer experience.

The current generation of consumers is used to frequent innovations to the shopping experience, so they expect comparable experiences from all courier companies, especially with small and midsize companies which have the capability and speed to make changes faster, adapt, embrace and apply new technologies and update delivery trends.

Same-day delivery could remove one of the most significant differences between making a purchase online and buying from a physical store: the customer’s ability to have and use the product purchased immediately or almost immediately.

Ecommerce keeps gaining momentum in the millennial generation, 30% of total retail sales. Marketing and logistics efforts must point towards creating solutions that fit the Millennial expectation, as they will be the future mass market, and most likely trend setters for generations to come.

“What’s really driving this is the need for instant gratification, which really chimes with a millennial audience. Even when ordering online they crave immediacy. Millennials are twice as likely to pick up online groceries on the same-day as purchase and 46% will pay higher for same-day delivery.”

25% of shoppers said they would consider abandoning an online shopping cart if same-day delivery was not an option.”

This is the answer to increasing your customer acquisition. Have a delivery partner that you can work with one that understands B2C and is easily adaptable to new circumstances.

Mark: So we’re going to talk a little bit about the history of Phantom, kind of our first broadcast on talking about the Phantom. What’s the history and what do you guys do?

Mark: Well the history is that I started off as an independent bike messenger, it was like a part time temporary thing and after about eight hours I’s hey this is better than anything I’ve ever done before so I was obviously working for another company called International Parcel Service, the owner was a cool guy and I said I’m going to quit, I’ve got to start may own company and he said well that’s fine, then he called me up half an hour later and said let me be your biggest client so I’m just zooming around making friends, walking through doors and that’s like it just took off and I want, it was super simple, I went to a Kinko’s one day, put out a flyer and the pagers started ringing and just everywhere I went people seemed to have a need to get things done quick and fast, no confusion so I found a niche, it kept it busy, it was super creative and I had a lot of fun so that’s the basic start of it. It started in 1996 and I haven’t looked back since, it’s been full bore since we started, got a huge awesome crew now and everybody likes it.

Mark: So what’s different about what you guys do right now?

Mark: I just think that all courier companies are the same and it’s just each company’s a different flavour and I think our flavours, people like it more, it’s a lot, it’s really simple to join up as a client and basically nobody wants to let anybody down, that’s the basic thing, nobody likes being in trouble and everyone likes it when you solve a problem so if you’re a problem solver you’re always getting a pat on the back and a thank you and I think our crew’s made up of problem solvers and it’s almost like everybody who works at that is an entrepreneur and they’re always in startup mode and they’re always wanted to please and they’re like I can do this, so I think maybe that’s our, our secret right now.

Mark: And what kind of plans do you have for the future?

Mark: Well of course everybody’s concerned about, there’s lots of concerns and courier peoples often throw out like they’re fossil fuel users but really we take cars off the road every day, you know, a company could send out five employees to do things or you can call Phantom Couriers and we can do ten things with two people and that’s something we really monitor and our efficiency is something that our, we have a huge technological side at the office and it’s all about efficiency so we’re always doing route planning which is efficient, you know, everyone gets on Google Maps like how can I get to the markets sooner but we do it with like how can we get to 15 different businesses faster so by using super good technology gps tracking and all of our drivers and awesome communication, that seems to be better for the environment and better fuel efficiency, better for profits for us and less expense for drivers and company and we’re also moving into more EV Vehicles so we’ve been investigating which ones we want to buy and where we’re going to start so EV is basically where we’re heading in the future. We’ve got our plan rolling out and plans starting at end of the summer so I’m looking forward to 2017 as being a better year for us with EV Vehicles.

Mark: Awesome, so if you’re looking for the most reliable courier company, guys who just get it done period, their motto is “Any package, anywhere, Phantom Couriers gets it there” and they’ve got some amazing stories, look forward to some incredible things that they’ve pulled off. These guys you can call them in Vancouver 604-899-5447 or check out their website, you can book everything right there phantomcouriers.com. Thanks a lot Mark.

With our Online Order & Tracking System
Time in Transit & Pricing Quotes are fast and easy.
Placing orders with our system puts all the control in your hands.
The Rate Calculator helps to determine what service level you require
Ordering on line is Faster & Easier than using the phone.
Easy set up
Get an Account Number & Password
See your deliveries confirmed, Picked Up & delivered.
Fast Efficient & Effective
Get proof of delivery emailed to you every time
www.digitalwaybill.com/phantomcouriers 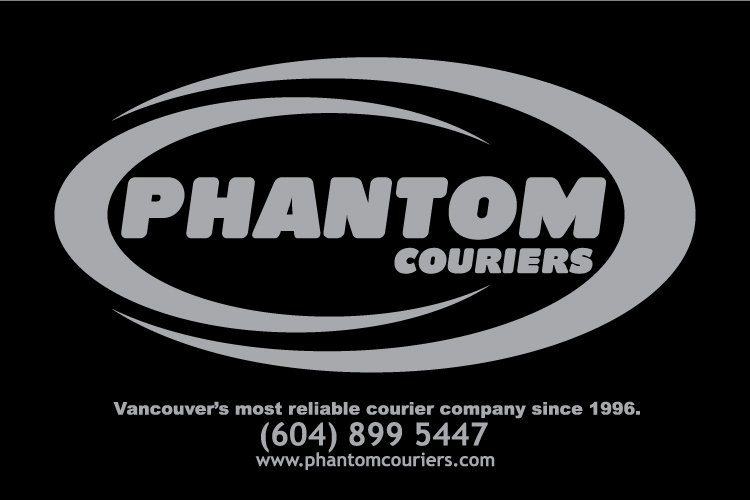 Why us? Well, plain and simple we are good, hands down. Our customer retention level is astronomical, when clients come on board with us, they stay. Some of our clients even laugh at salespeople that come in and try to get them to switch, those always make for great stories.

We are 100% locally owned and operated and we have no investors, we do it all ourselves, we are extremely proud that we need no outside help. Our owner is also the dispatcher, meaning he is hands on, knows what’s going on all the time, constant communication is the keystone to our success with customer service and quality of service as the support, so to say.

Services Offered by Us

Areas delivered to – Downtown Vancouver, Lower Mainland and the World

Same day cut off: You got to be kidding, we’re in the same city, why wouldn’t we do it if we can?

Phantom Couriers: Ghost in the Machine from Gregory Gan on Vimeo.

What has the ability to be everywhere, or at many places at once? What can exist simultaneously inside and outside the social mechanisms of urban life? Phantom Couriers: Ghost in the Machine works on several interpretive layers, superimposing beautiful film images, a genuine narrative and a subculture that many feel curious about, but few are able to penetrate.

This documentary short film tells the story of Phantom Couriers, Vancouver’s longest-running independent courier company. Mark Huggan—owner, dispatcher, storyteller extraordinaire—relates how he started the company, and how he continues to retain both his couriers, and his clients. Bike messengers Brandon, Sarah and Dan describe the fast-paced world of being a courier in Vancouver in this intimate and swift portrait.